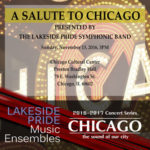 Our year-long celebration of our city continues with the Symphonic Band’s Salute to Chicago.  Our concert will be performed under the world-famous Louis Tiffany stained glass dome in Preston Bradley Hall, and will feature music inspired by the City of Chicago and its history.  Musical selections to include pieces named for our city: Johan de Meij’s Windy City Overture, Sousa’s Belle of Chicago, and music from Chicago – both the Broadway musical and the band of the same name.  Trumpet soloist Mary Galime will be featured on Arban’s Carnaval de Venise, as inspired by Herbert L. Clarke’s performances with the Sousa Band here in 1893.  LGBT composer Steven Reineke’s work Rise of the Firebird will open the second half as an homage to the Great Chicago Fire of 1871 and our city’s subsequent recovery.  Our program will conclude with three pieces inspired by performances of the Chicago Symphony Orchestra: Elgar’s Nimrod (from Enigma Variations), (US premiere by the CSO in 1902); Dvořák’s Slavonic Dance no. 8; and the Finale Saint-Saëns’s Carnival of the Animals (recorded by the CSO for the Fantasia 2000 soundtrack).

Advance ticketing has closed – tickets now available at the door.